We get a lot of people asking us about LED mapping (also known as pixel mapping).

Some are just starting to learn the ropes, while others may have dabbled previously in realms such as live theater design or artistic installation. Indeed, even professional lighting designers sometimes want to know how to expand their more traditional approaches and explore new frontiers of technology. But whatever your background and situation, having the opportunity to pick up some expert advice, knowledge, tips or tricks can often pay dividends.

So, we thought who better to field some of these questions than our very own mapping guru?

As a software engineer, you had already created the successful Lightjams application for interactive DMX lighting. How did you go from there to thinking about LED mapping?

Well, a design company came to me with a lighting installation concept for a new public hospital. They showed me the picture of a kind of electrocardiogram, onto which more than 8,000 individually controllable LEDs would be laid out. They also wanted total control over the content using custom-made videos. Since it was not a simple, rectangular LED screen, all pixels would need to be manually mapped to fit the curves in the design, and I could see that trying to achieve this with any existing lighting software, including my very own Lightjams, would be a nightmare.

Was this a simple case of logistics?

Basically, yes. The thing is, LEDs have drastically changed the face of lighting. The cost per LED is now so cheap (less than 10 cents) that even low-budget projects can use thousands of them. For traditional lighting controllers, that means handling a lot more fixtures than was originally planned or even possible. For example, when working with a few hundred fixtures, manually positioning each one on a grid is workable. It takes time, but we can do it. However, when we reach a thousand, and then ten thousand – or more – LEDs forming arbitrary shapes, then new tools are really needed if we want to keep our sanity. 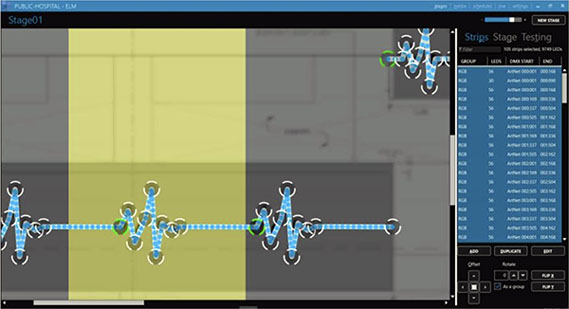 So you essentially had to invent your own tool just to do a specific job?

Exactly. I was very excited by the project but initially had no technical idea as to how it might be done. But then I started to play around with how to do pixel mapping with curves, and after a few weeks of fun, sleep deprivation and a few “aha!” moments, I had a rough design for some new brand new software dedicated to LED mapping. I knew it would have to feature a very flexible and fast mapping process that would support curves and any kind of irregular shape. It would also need to output a lot of DMX universes and efficiently handle high resolution videos. And that was how ENTTEC LED Mapper (ELM) was born.

So many people tell us how much they honestly enjoy working with ELM, as well as it being voted Live Design magazine’s lighting control software product of the year. You must be proud.

It’s wonderful to have nurtured ELM into the phenomenon that it’s become, and yes, best of all is knowing that every day it’s making a serious difference out there in the professional lighting industry, enabling new kinds of LED mapping projects and saving designers countless hours of tedious manual mapping work.

While we’ve got Mathieu here talking about LED mapping, let’s have a look at some of the common questions that we get asked.

What you need to know.

What is LED mapping? What sort of lights can it control? How do I get started? What computer specs will I need? Where should I keep my computer?

What is LED mapping?

In simple terms, it’s a convenient way to control a lot of lights, taking into account their positions in the real-world.

How does it differ from more traditional lighting control software? Well, there are two main differences. Firstly, when doing pixel mapping, the position of each light is very important. And secondly, you have many more lights to control than you would with standard DMX fixtures. It could well be a thousand times more. Theatrically-derived traditional lighting consoles simply weren’t made to handle that many lights and generate effects based on their positions.

What sort of lights can it control?

Mapping software such as ELM sends standard DMX over the network. That means it can control any DMX-enabled fixtures, including PARs and LED controllers, and is able to be configured to receive any of these:

4 DMX channels RGBW or RGBA or WRGB or GRBW

In the new version of ELM, you’ll be able to specify an offset when patching, allowing you to easily merge the DMX from ELM with the DMX from a lighting console. This way, you can control complex fixtures like moving heads: ELM looks after the colors, while the console will control the movements and other parameters.

How do I get started?

To keep things simple at first, I’d start without LEDs by only using ELM with the built-in monitor. Then you can follow the video tutorials and get used to how pixel mapping works. As a next step, I’d setup a 3D visualizer like Capture and send the LED preview via the NDI output feature. This way, you can experiment freely without any real LEDs and still get a realistic preview. Finally, it’s time to buy a LED controller like the Pixelator and compatible LEDs. See the Pixel Tape FAQ page.

What computer specs will I need?

When specifying a PC to do LED mapping, there are several important factors to consider. You’re going to want a fairly robust system – after all, it’s better to be running at 60% capacity than 90%. Therefore, the most important component would be your CPU. The more layers you’re going to want to map, and the more Universes of control you’re going to want, then the faster and more powerful your CPU will have to be.

Software like ENTTEC LED Mapper doesn’t need lots of RAM. 8GB will do you nicely, but if you use more than two built-in effects at the same time, then a medium range GPU is recommended. A one gigabit network port will be enough for 2048 Universes @ 44fps and you should also have at least a small SSD (say, 128GB).

The computer requirements depend on your media type. For example, playing multiple HD videos requires a good computer. A rule of thumb is you can play one full HD video @ 30fps for each 2 GHz CPU core. So if you have an Intel i7 4 GHz (4 cores), you should be able to play 8 full HD videos. Increasing the playback speed to 2x means the fps also increases two times and the number of videos you can play simultaneously is roughly divided by two. The next table shows the approximate number of videos you can play simultaneously at 30 fps depending on your CPU. CPU Speed x Cores Full HD:

For live video performances, when you want to change the playback speed and go up to 10x, the recommended video resolution is 640×360. For the DMX output, a 1 Gigabit network should be able to handle 2048 universes @ 44fps. For more universes, a supplementary network card and a second Ethernet network are recommended.

If using multiple layers of generative Fx within your performance an NVIDIA GeForce 900 / NVIDIA 10 series graphics cards or better are recommended.

Where should I keep my computer?

Ideally in a control room – somewhere dry with non-condensing humidity and no sudden temperature changes, etc. Also, if you’re a touring type and your PC is going to be battered around in a flight-case, you may also wish to consider some form of shock-mounting system to help protect it.

You’ll need a dedicated LED-mapping software package, and there are a number of these currently on the market to choose from. Naturally, we recommend ENTTEC LED Mapper (ELM), which is the choice of many professional lighting designers around the world. Aside from its ease of use and revolutionary features, ELM can also be controlled remotely using third-party iPad apps such as Ctrl by ON LX . It’s also a very vibrant, ongoing project, which is an important consideration when purchasing any software. We have a team working around the clock on new updates and valuable improvements to the software, which of course is a great thing for our dedicated global user-base. We very much listen to our users and take on board their feedback, because it’s vital that the software does the things that users need it to, and that it does them very well.

Does this mean I can throw my lighting console away?

Not at all! You can use your favorite console in conjunction with LED mapping software to control using remote options, such as using advanced or basic DMX profiles, plus it will have the ability to take in various protocols such as Art-Net, sACN or your ENTTEC USB Pro.

What output protocol do you recommend using?

Art-Net is the lightweight protocol. You can also enable the sync option (supported by the Pixelator) to avoid tearing problems. ELM also outputs KiNET and implements sync for sACN..

Can I stream live video to my installation?

Yes. Using ELM, you can incorporate multiple streams concurrently from all manner of sources such as NDI, MPEG streams, capture cards or cameras. You are only limited by your network bandwidth.

Can I stream live audio to my installation for my LEDs to react to?

Yes. From v413 onward, ELM has introduced the ability to receive up to 8 audio feeds. Frequency band analysis can be carried out in real time on each of these channels to create live audio reactive Fx.

What’s the deal with using layers?

You can create more complex visuals by layering multiple media on top of each other (see the new video tutorial). In addition to the usual way layers work in video software, ELM allows each layer to reorder the LEDs inside of it or to contain completely different LEDs.

How do you control white and amber levels when using RGBW and RGBA pixels?

If you have any other questions relating to LED mapping, drop us a message at support@enttec.com and we’ll do our best to answer those for you.